If there is one ride in PortAventura World that has been well-known from day one, it has to be Dragon Khan. Famous throughout the world, right from the start it has always been one of the planet’s most unique attractions, and one of the emblems of the resort.

Do you want to know more about this ride? Then read on and we will tell you about Dragon Khan’s height, speed, history, and much more 😉

The stuff of legends

Many centuries before our time, in a far-off land, there was a prince named Hu who tried to dethrone the emperor to satisfy his own ambitions. His plan failed and, as punishment, the gods turned him into a huge dragon, condemned to wander aimlessly through the skies.

Since then, every time someone tries to ride him, he unleashes his anger by spinning around at full speed, doing everything possible so that no one can tame him.

This story, now a legend, inspired one of the most iconic journeys in the history of roller coasters. From the time the passenger climbs aboard the dragon until they get off, they will feel their heart racing and pure adrenaline pumping.

What is the track like and what is the maximum height of Dragon Khan?

The journey begins with a curve to the right and a gentle descent, which leads us to climb towards a peak located 45.1 metres above the ground. After making a turn, it starts a high-speed descent to pass through one of the world’s largest vertical loops. At 36 metres high, it was the largest in the world when the ride was first opened.

From that point, the pace ramps up with a dive loop, a zero-G roll, and a huge cobra roll, taking you to halfway, where there is a short respite. So short that there’s no time for the heart to slow down, since immediately afterwards there is a curved descent that connects with another small vertical loop, which ends with a turn of around 270 degrees, leading to the interlocking corkscrew, followed by a final curve at a 180-degree angle.

All this in less than two minutes and at a maximum speed of 110 km per hour. Legendary, don’t you think?

Architecture that takes you right back to ancient China

Dragon Khan is located in PortAventura Park, more specifically in the world of China, so its theme is based around this age-old culture.

At the entrance, for example, the ride’s logo is supported by two columns with an oriental aesthetic. Once inside the queue area, we find a giant dragon head that plunges us even deeper into this world in which we find ourselves.

In addition, a distinctive feature of the building is how the spaces are distributed in rectangular units to form a whole. In this way, it creates an impressive, dynamic, and mysterious exterior appearance, which leaves passengers unaware of what they will find once they board the ride.

Regarding the attraction itself, the track is red with blue supports to simulate the classic Chinese dragon. It also has a square backbone that, due to its hollowness, elicits a distinctive roar when the train passes over it. 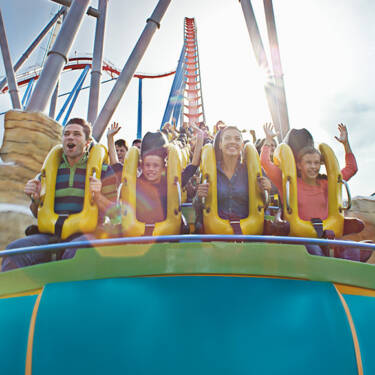 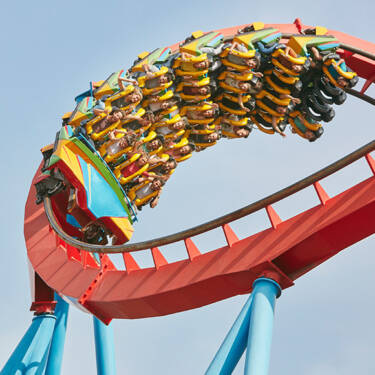 Although PortAventura World is home to several exciting and white-knuckle rides, Dragon Khan has a certain something that makes it extra special. When you climb aboard this attraction, you can feel that it’s a part of the history of the resort and of the entire world, since, until it was opened in 1995, nothing like it had ever been seen before.

It was a ground-breaking roller coaster, not just because of its eight inversions and its speed, but also for the type of emotions it generates. Even today, when someone rides it for the very first time, they feel exactly the same as the first adventurers: breathless, eager, butterflies in the stomach, heart racing as the moment approaches, raised pulse as it sets off, and the feeling of the wind on their face.

The heart won’t slow down until the journey around the track comes to an end. A ride that true adrenaline junkies will want to experience again and again.

Are you ready to take on the speed of Dragon Khan?

Not everyone is brave enough to live the adventure of Dragon Khan, but almost everyone who does repeats it. It may be true that the first time you see the inversions they look scary, but you’ll soon realise that you can’t limit this special experience to just once in your lifetime.

Come and tame the dragon, it's waiting for you

The maximum height of Dragon Khan is 45.1 metres.